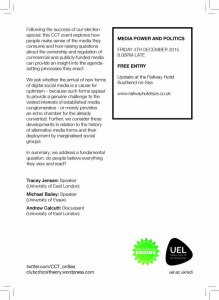 Following the success of our election special, this CCT event explores how people make sense of the media they consume and how raising questions about the ownership and regulation of commercial and publicly-funded media can provide an insight into the agenda-setting processes they enact.

We ask whether the arrival of new forms of digital social media is a cause for optimism – because such forms appear to provide a genuine challenge to the vested interests of established media conglomerates – or merely provides an echo chamber for the already converted. Further, we consider these developments in relation to the history of alternative media forms and their deployment by marginalised social groups.

In summary, we address a fundamental question: do people believe everything they view and read?

Michael teaches at the University of Essex and is currently writing a book about public sociology. His interests in this field have led him to present lectures on ‘Globalisation, Anticapitalism and Associative Democracy’ at various international universities, particularly in China. Michael connects these interests to his broader commitment to critical theory; historical sociology; working-class heritage and sociology of the media and modern culture. AT CCT he will examine the history of alternative media forms and their legacies.

‘Hackademic’ Andrew Calcutt was a journalist for 25 years before he became an academic at the University of East London. As a journalist, he worked in print (Arena, Esquire, Living Marxism/LM, the Modern Review), in broadcasting (Clarke TV for Channel4), and online (commissioning editor, Channel Cyberia for MSN). As a lecturer in journalism, his priorities are good copy and clear thinking. Andrew will draw on these experiences when identifying comparative and contrasting themes in both presentations in order to open the discussion.

Our next event is on Friday 4th Dec upstairs at the Railway as usual.

Following on from our successful election special back in May (the club night, not the result), Club Critical Theory returns on Fri 4th Dec with a discussion that will no doubt mention Corbynmania.